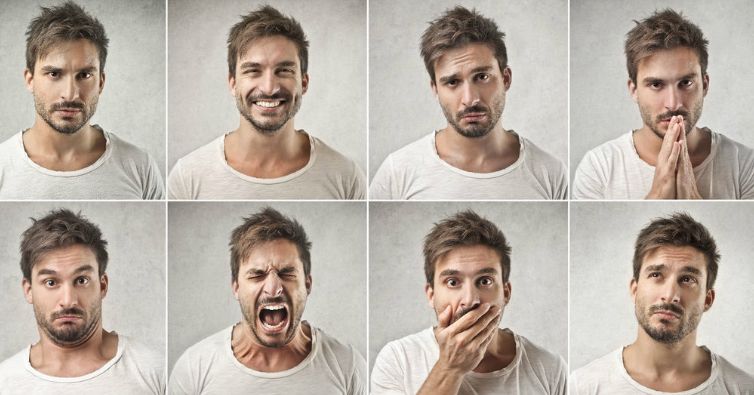 What the researchers say: Our facial expressions stem primarily from intentions – not from feelings – according to a new paper in the journal Trends in Cognitive Sciences .   “The traditional view of our facial expressions is that they’re about us, that they reveal our moods and emotions,” the lead author said.  However in reality “our faces are not about us, but about where we want a social interaction to go. For example, the ‘cry’ face is usually considered an expression of sadness, but we use that face to solicit succor, whether that means reassurance, words of comfort or just a hug.”   The new study supports and expands on the researchers’ previous work debunking the older, widely held assumption that facial expressions just reveal people’s emotions.   “This paper is an attempt to bring the field up to a scientific understanding of human facial displays, and to restore continuity with modern views of animal communication,” the lead author said. “From preschool on, we see smiley faces with the word ‘happy’ written under them. We see sad faces with the word ‘sad’ written under them. That may not be the best way to understand facial expressions. A monkey at the zoo that smiles at you is not necessarily happy – It is giving a ‘submissive threat grimace.’“   In recent years biologists re-examined how animals communicate and began to see them as sophisticated communicators and negotiators, and this approach suggests that our facial expressions serve the same ends (see previous TRs). The paper further delves into what the researchers called “quirky phenomena,” like the faces people make when they’re alone.

“There is no doubt that what we do with our facial displays is different than what nonhumans do,” they said, “but our displays function in many of the same ways. They act as social tools in behavioral negotiation.”   The new work also incorporates research on how indigenous Trobriand Islanders in Papua New Guinea – still largely untainted by Western traditions and conventions – think about emotion and use facial expressions. The investigators found that what previously had been considered a universal face of fear, in the case of the Trobrianders actually serves as a threat display aimed at frightening others into submission.”

“Researchers in the 1960s had preconceived notions about certain expressions matching specific emotions,” the researchers said. “And so, their experiments – devised and interpreted through a Western lens – were bound to corroborate those beliefs.”   Many newer studies have investigated the links between facial expressions and emotions, he noted, finding surprisingly little evidence of a relationship between the two.   ‘Angry’ faces don’t necessarily mean we’re actually angry, he explained. We may be frustrated or hurt – but regardless of how we feel, those faces serve to subdue, intimidate or signal possible retaliation against whomever we point them at.   “A ‘disgust’ face may mean a person is about to throw up, but it can also mean we don’t like atonal music, and the other person knows not to put on a Schoenberg CD,” the researchers explained. “When we ask someone about the weather outside, her smile says it’s nice out, even if she’s having a rotten day.”

In past studies, the team has shown that when we imagine being in situations that are fun, scary, sad or irritating, we make more expressions when we imagine being with others rather than facing those imaginary situations alone. People who watch funny videos, he said, smile more when they are watching with friends – and they smile just as much when they believe that a friend is watching the same video elsewhere at the same time.   “When we are with others, we’re always checking to see how they are reacting, and they make faces when we see them looking for our reactions,” the lead author noted. “Those interacting don’t have to be people, either. People make faces all the time at soda machines that don’t return their change, or computers that reboot or update in the middle of a presentation. And they’ll make the same faces if you ask them to imagine those situations.”

So, what? This study is more than just interesting because, forever it seems, we have been analyzing facial expressions in the wrong way—as being about emotion, rather than about soliciting action. And yet this new finding should not totally shock TR readers because I have been covering stories that indicated that we look to people to “do” certain things rather than “feel” certain ways. It would seem that our facial expressions reinforce this need for “doing.”   But much of our negotiating dogma and much of our diplomacy is based on trying to discern people’s “feelings” from their faces. All of that will have to change.

What now? If what we are seeing in a person’s face is a reflection of need rather than emotion, this might make most performance dialogues and negotiations very different from what they are now. If we  recognize that all such interactions are about exchanging needs—some of which are expressed in our faces—rather than making someone “feel” a certain way (e.g. “happy with the outcome”) we can have much better results. You can dialogue about need much more fruitfully than you can about emotions or cognitions (i.e., “mindsets”). Needs can be concretely identified and possibly met leading to interventions which are satisfying to all parties.   It shows the importance of what we call “Needs Based Dialogue,” where the objective is the mutual satisfaction of both parties real—even if not initially stated—needs.   The study also reinforces the old adage that most of what goes on in any face-to-face communication is not necessarily.