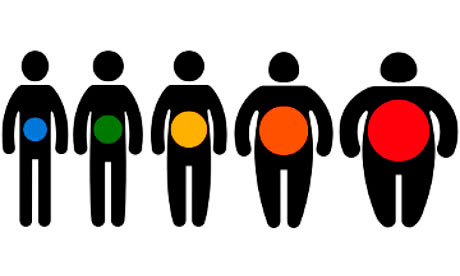 It is well known that poorer Americans,Australians or Europeans are more likely to be obese or suffer from diabetes.

This is relatively recent and has only developed in the past 30 years, according to an international  team of researchers.They found that since 1990, the rise of obesity and diabetes was fastest amongthe poorest U.S. regions of the US and other countries.

The timing also fits with the generations exposed to high fructose corn syrup in foodstuffs and drinks, said the lead author of the study in the journal Palgrave Communications.

Experts describe the unprecedented rise in obesity in recent history as the most rapid change ever seen in human physiology. Only a century ago, obesity was a phenomenon almost unknown tocitizens of the US and other developed countries.

What the researchers say: For the US section of the study the researchers analyzed data made available by the US Centre of Disease Control and Prevention about obesity levels, leisure activities, income rates and incidences of diabetes. In most cases, this data was compiled for around 3000 US counties. The researchers also drew on data collected by the Food Access Research Atlas project. These documented a person's access to vehicles and proximity to supermarkets and large grocery stores where they could buy affordable and nutritious food.

The analysis shows that in 1990, when population-scale obesity rates in the US were about a third of what they are today, there was no link between income and obesity or diabetes. By 2015, there was a strong likelihood that obesity or diabetes would be typical in lower income households. In states like Alabama, Mississippi and West Virginia, where the average household income was below 45,000 US dollars a year, 35 per cent of people were obese. In more affluent states such as Colorado, Massachusetts or California, where households earned on average 65 000 US dollars a year, one in four citizens was obese.

"The data point to a developing trend that was not present in 1990. This negative correlation has evolved steadily over recent decades," explains the lead researcher. "By 2015 the situation was such that members of lower income households had a much greater chance of suffering from obesity and diabetes."

The researchers speculate that the oversupply and ready access to foodstuffs containing high fructose corn syrup may be driving obesity levels. In the past, people's diets contained very little sugar and no refined carbohydrates. Overall sugar consumption in the American diet has risen gradually in the 20th century, from 12 per cent of US food energy in 1909 to 19 per cent by the year 2000.

"The timing is suggestive, with the generations of young Americans consuming high fructose corn syrup in food stuffs predicting a similar increase in obesity as they became adults," they note.

High fructose corn syrup has been used in US foodstuffs since 1970. By the year 2000, each person in the US consumed on average around 27 kilograms (60 pounds) of it per year, which is about half of their annual total sugar intake. Corn syrup is the main sweetener in soft drinks. In 2016 the average US household spent 7 per cent and low-income households spent 9 per of their income on soft drinks.

So,what? In a time of flat to falling incomes people’s diets are largely dictated by what they can easily afford. Fatty and sugary foods are cheaper. Also, if you are stressed, lack hope or optimism about your future—like many low-income people—or try to insulate yourself from failure or loneliness then you are more likely to overeat as a compensator. Real incomes for most working-class people have been largely flat since the 1970s.

I believe that these factors are the real causes of the rise in diabetes and obesity, not just the availability of drinks laced with corn syrup.

Feeling bad about feeling bad can make you feel worse.

Divorce, job-loss and forced retirement all have the same effect on the psychocardiac system—something which few policymakers, corporate leaders or even psychiatrists realize. What’s more, low socioeconomic status is the same to the brain as taking a lower status or lower paying job.