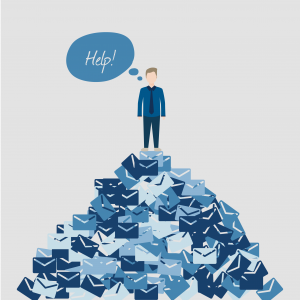 The team has shown that keeping up with email traffic places high demands on managers, and this prevents them from achieving their goals and from being good leaders. Their study, is one of the first to examine how distractions from email impact managers, their productivity and their role as leaders.

What the researchers say: According to the research, employees spend more than 90 minutes every day (or seven-and-a-half hours every week) recovering from email interruptions. Managers, the team said, are no different, and their distractions have further-reaching implications.

“Like most tools, email is useful, but it can become disruptive and even damaging if used excessively or inappropriately,” said the lead author. “When managers are the ones trying to recover from email interruptions, they fail to meet their goals, they neglect manager-responsibilities and their subordinates don’t have the leadership behavior they need to thrive.”

What also makes managers different from other employees is that when feeling overwhelmed and unproductive because of email demands, they recover by limiting leader behaviors and pivoting to tactical duties. This limiting, the researchers said, is strategic and intentional so that they feel more productive, more in control.

“Interestingly, we found that managers scaled back ‘leader behaviors’ more so than initiating ‘structure behaviors,’” the lead author commented. “The former behaviors relate to motivating and inspiring subordinates, talking optimistically about the future or explaining why work tasks are important; the latter are more concrete and task-focused, such as setting work goals, assigning duties or providing feedback.”

So, not only are managers not managing well—but they’re also focusing on smaller tasks for the sake of feeling productive.

To test how email demands hinder managers the researchers collected surveys from a large group of leaders twice a day for two weeks. They reported their frequency of emails. They related this to their perceived progress on core job duties, how often they engaged in effective transformational leader behaviors or defaulted to less high-level tasks.

“We found that on days when managers reported high email demands, they report lower perceived work progress as a result, and in turn engage in fewer effective leader behaviors,” said the lead researcher. Subordinates don’t get motivated or inspired and their task performance, work satisfaction, organizational commitment, intrinsic motivation and engagement all decrease. Worse, employees’ stress and negative emotions increase, the researchers noted.

“The moral of the story is that managers need to set aside specific times to check email. This puts the manager in control—rather than reacting whenever a new message appears in the inbox, which wrestles control away from the manager,” said the lead author. “As we cite in the paper, findings from prior research suggest that it takes time and effort for employees to transition between email and work tasks, so minimizing the number of times they have to make that transition is to their benefit.”

So, what? We are all distracted by emails because they are designed to distract—like every other bit of digital communication. It has this effect because we are not designed to cope with it. We are genetically wired for face-to-face communication. The stress hormone cortisol is triggered to some extent with every email (as it is with everything that is beyond our design-specs) and we need to “recover” from this stressor—as we do from every other unnatural stressor that we face—and to readjust. This takes time.

So, the time taken up by emails, Facebook, Instagram, LinkedIn and the like is not just the time assimilating the information but also recovering from the stress that all those annoyances cause.

The future of mind control

Modern scientists are not immune from corruption in the pursuit of patents, funding or Nobel Prizes. Like genetic engineering, the excuse is always that “we can cure an illness or prevent a possible disability.” Soon enough, the desire to heal becomes the desire to self-enrich.