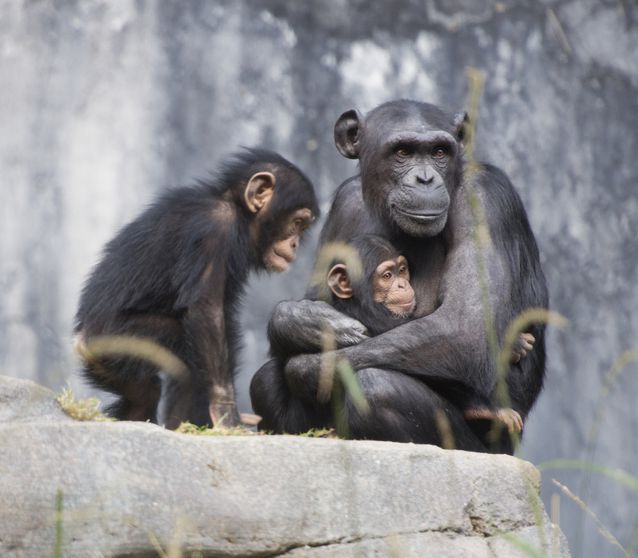 This seems to be the week for chimpanzee studies, there are a couple of really interesting ones which shed light on the chimp’s closest cousins—us.

The  study that stands out is one that shows that male chimps who are less aggressive and form strong social bonds tend to live longer.  There is a growing realization that personality traits have an effect on health in all species—even chickens—and this study adds to this body of research. But it also adds something new, which if replicated will mean we will have to rewrite some textbooks yet again.

What the researchers say: The team found that, contrary to some studies of humans and other primates, being more extroverted, conscientious or neurotic had no impact on chimpanzee’s longevity.

Using personality and survival data from 538 chimpanzees the study tested which aspects of their personalities were associated with longevity. The results suggest that amongst male chimps, evolution has favored those that are more agreeable.

Researchers also found that female chimps who demonstrated openness—those who more readily explored and adapted to changes in their physical and social environments—were more likely to live longer.

The researchers, from the US and Japan, assessed chimps’ personalities based on a questionnaire of common adjectives and chimpanzee behaviors completed by keepers and researchers who had worked with the animals being studied for between seven and 24 years. Their study, published in eLife, is the one of the largest ever analyses of individual chimp behavior.

The researchers concluded that their research demonstrated that links between personality and lifespan in people may not be entirely explained by inherent characteristics, but that lifestyle—especially our social arrangements—may play a greater part.

So, what: For some time researchers have known that the genetic systems of humans and other great apes were remarkably similar (we differ from chimps and bonobos by less than 1%) and what’s more our genetically-based personality traits are not really all that different. The only real difference is that humans are more relationship-centered than other apes because, having fewer natural defenses, we are more socially dependent.

It makes sense then that—as many studies have shown—our immune system functions better when we have supportive people around us. Therefore, those with better social support—at work or otherwise—should live longer. The fact that this is seen to be true of chimps as well reinforces this.

Most behavioral neurogeneticists would argue that all the traits that studies have indicated as leading to longevity—such as conscientiousness—do so only because they aid in relationship-forming.

How do we make moral decisions?