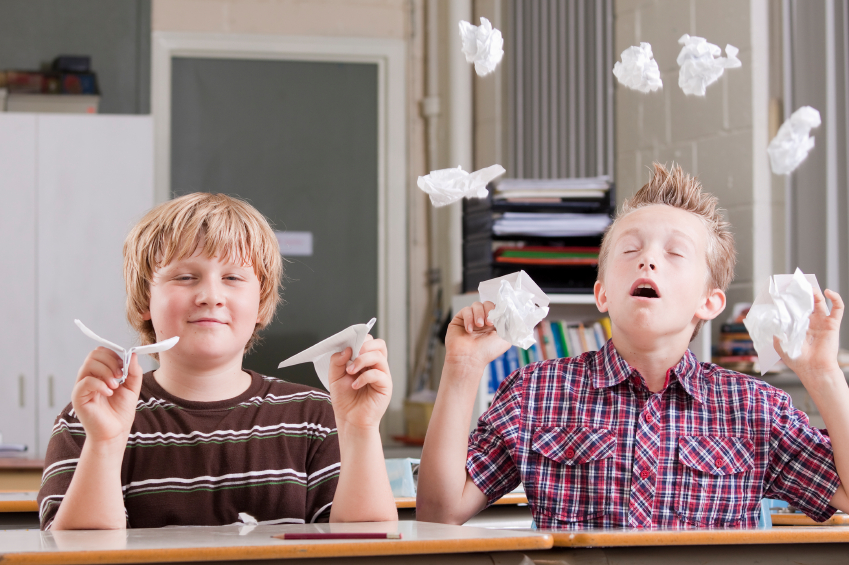 Some things in life just aren’t fair. In many ways education—especially the way it’s designed currently—is unfair to boys. This was brought home, yet again, in a study published this week.   The new study confirms that there are gender differences in how teachers perceive playfulness–and provides insights into the potentially damaging effects of discouraging playful behavior in the classroom.

What the researchers say: The research shows that playful boys are viewed as rebellious and disruptive by their 1st, 2nd, and 3rd-grade teachers whereas playful girls are not. As a result of observing teachers’ attempts to discourage the expression of playfulness, the boys’ classmates changed their view of these “class clowns” from initially positive to increasingly negative. The playful boys also developed more negative perceptions of themselves over time.

The study, published in Frontiers in Psychology, indicates that teachers’ negative perceptions of playful boys in their early school years may forebode a longer-term negative trajectory for the boys as they continue through their formal school years.   “Children regularly observe playful boys, or ‘class clowns’, being treated negatively by their teachers, and over time come to change their view of them as desirable playmates in 1st and 2nd grades to being seen as boys who should be avoided or spurned in 3rd grade,” says the lead author.   The researchers followed 278 kindergarten-aged children over the following 3 school years to investigate children’s, classmates’ and teachers’ views on playfulness. At the end of each academic year, the children were rated by teachers, peers and themselves for perceptions of their level of playfulness, disruptive behavior, social competence, social status and class clown status.

The results confirmed dominant gender differences found by previous research in the field. Whereas teachers regarded playful boys as distinct from less playful boys, no such discrepancy was detected for girls. This manifested as playful boys being negatively regarded as rebellious, intrusive and having poor social skills, and being labeled as “class clowns” by their teachers. In contrast, the girls’ playfulness levels were not a consideration in ratings by teachers or peers.   The teachers’ disapproving view of playful boys contrasted with the children’s self-perception and how they were regarded by their peers—who at the outset viewed playful boys as appealing and desired playmates.

The data revealed that the playful boys were stigmatized by their teachers, which was communicated through verbal and non-verbal reprimands. The other children in the class picked up on this message, which had a direct impact on their perception as “class clowns.” Teachers view class clowns as problematic and strive to stifle or extinguish their playfulness,” says the lead author, who argues that these negative perceptions were likely transferred to the playful boys and their peers.   She believes the findings are telling on the way in which the classroom setting affects children. “My research in the field of educational psychology, and years of studying how and what children learn in school, has taught me that most of the important ‘life lessons’ take place outside the structured adult-directed classroom setting, and much more frequently during children’s own free play alone and with each other,” she notes.   “Over many years of studying children at play, I have witnessed an alarming increase in play being structured and directed by adults—and what was once free play out-of-school time being usurped for extracurricular activities and lessons, tutoring, homework, and the like.”   “The way that our society views and treats children and childhood has undergone massive changes,” she continues. “There is much being written about the trends in extending schooling down to increasingly younger ages, and research that shows that expectations for kindergarten today are what was in place for later primary grades previously.”   “The decreases in individual expression and creativity, and social and emotional skills, and the increases in bullying, childhood obesity, and mental health issues such as stress, depression, anxiety are all cogent signals that we need to restore and extend children’s free play time. All the projections are for this negative trajectory to continue if we don’t change its course and effect major changes,” she concludes.

She would like to see future research focus in more detail on the children’s and teachers’ actual interactions in the classroom, to determine the basis of teachers’ perception of playful boys as disruptive and to further investigate the effect of this phenomenon on children’s behavior and welfare.

So, what?  Many researchers over the last 15 years have been zeroing in on the way that as a society we are treating boyhood as a medical condition. Boys are much more likely to be put on Ritalin and similar drugs to try and calm their natural rambunctiousness. I have observed firsthand the difference between boys and girls in their “natural” hunter-gatherer state. Boys are more restless, more physical in their play and it’s easy to see why. They are genetically programmed to be the hunters, the ones who find excitement in the danger of the hunt (obviously this is a generalization and does not take into account either socialization or individual genetic differences. All genetic science is about statistical averages). If this is curtailed or circumscribed, then it will—as the researchers point out—be channeled into more destructive paths.

At school, as at work, we are not considering the design specs of either individuals or of genders. We want everyone to be the same, even when they’re not. We want them to be compliant students, consumers, and savers, accepting of the laid-down social norms. Differences may be both officially celebrated and in practice ignored, and even punished. Disruptors and rebels are good so long as they don’t disrupt too much or rebel against the established norms.   We need to go back and look hard at what is a human being, without assumptions about gender or other roles, specialties and attitudes. What are we designed for—generally and individually? How can we allow for that? Should boys be educated differently? Given a future society without work in the “traditional” sense of the word, what is the role of education? Is school the right place for this to happen? We are all genetically designed to do things best when we enjoy doing them—when we’re having fun. How do we bring this back in terms which are aligned with our individual, species and gender genetics?

What now? This is a conversation which our society needs to have. It should begin in both schools and workplaces. How can we use our rapidly increasing knowledge of human genetics to create more enjoyment—and thus better learning and mental and physical good health—in both?