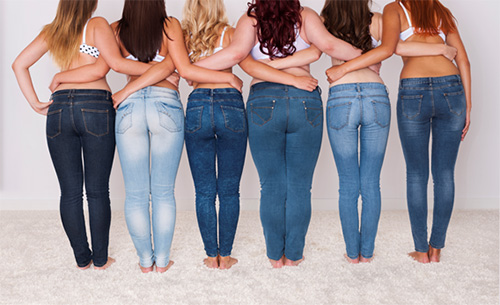 What the researchers say: “Our research shows that people infer a wide range of personality traits just by looking at the physical features of a particular body,” said the lead author. “Stereotypes based on body shape can contribute to how we judge and interact with new acquaintances and strangers. Understanding these biases is important for considering how we form first impressions.”

Previous research has shown that we infer a considerable amount of social information by looking at other people’s faces (see previous TRs), but relatively little research has explored whether body shapes also contribute to these judgments.

“We wanted to know whether we could link personality descriptor words to body shape in predictable ways,” he explains. “That is, do people look at a person’s body and make snap judgments about whether the person is lazy, enthusiastic, or irritable?”

The researchers created 140 realistic body models, of which 70 were female and 70 male. The three-dimensional renderings were generated from random values along 10 different body dimensions, using data from laser scans of actual human bodies. Using these models allowed the researchers to know the precise physical measurements of each body shown in the study.

A total of 76 undergraduate participants viewed a set of models – they saw each body from two angles and indicated whether 30 trait words shown on screen applied to that body. The trait words reflected dimensions of the Big Five personality traits (a common measure of personality used in psychology research) typically seen as positive (e.g., enthusiastic, extraverted, dominant) or negative (e.g., quiet, reserved, shy).

Furthermore, the participants perceived classically feminine (e.g., pear-shaped) and classically masculine (e.g., broad-shouldered) bodies as being associated with “active” traits, such as being quarrelsome, extraverted, and irritable. Male and female bodies that were more rectangular, on the other hand, were associated with relatively passive traits, such as being trustworthy, shy, dependable, and warm.

In additional analyses, the researchers found that they could reliably predict personality trait judgments from specific combinations of different body shape features.

“To our knowledge, this is the first study to consider the role of more nuanced aspects of body shape—beyond height and weight—in personality judgments about people,” said the coauthor of the study.

The tendency to infer personality traits from body shape is likely universal, the authors argue, but they note that the exact inferences people make will vary according to their culture, ethnicity, and even age. And it remains to be seen how other characteristics, such as attractiveness or gender, interact with body shape to influence the inferences that people make.

These findings add a new layer to the science behind first impressions, revealing “the complicated and value-based judgments that people make about strangers based only on their bodies,” the researchers conclude.

So, what? The human system decides to trust or not trust within a fraction of a second as a defensive measure. This study is interesting as it adds to our knowledge of how we make that calculation.