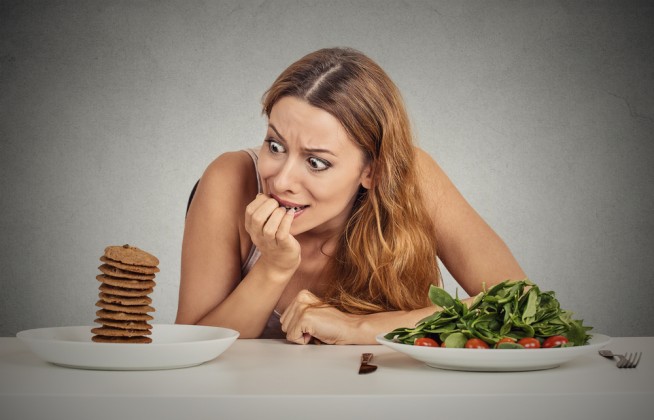 While we’re on the subject of human design specs a new study shows how our genetic craving for one kind of food can make us prey to those who would hook us on unhealthy stuff.  In fact, the study shows we’ll pay more for unhealthy foods we crave when that craving hits. The study also shows that we’re willing to pay disproportionately more for larger portion sizes of craved food items.   The research appears in the journal Proceedings of the National Academy of Sciences (PNAS).

What the researchers say: “Our results indicate that even if people strive to eat healthier, craving could overshadow the importance of health by boosting the value of tempting, unhealthy foods relative to healthier options,” explains the paper’s lead author. “Craving, which is pervasive in daily life, may nudge our choices in very specific ways that help us acquire those things that made us feel good in the past—such as the sweetness of berries—even if sweet (sugary) things may not be consistent with our current health goals.”

There is growing interest in several sectors—marketing, psychology, economics, and medicine—in understanding how our psychological states and physiological needs affect our behavior as consumers. Of particular concern is craving, which has long been recognized as a state of mind that contributes to addiction and, in recent years, to eating disorders and obesity.   Yet, the researchers note, little is known about the nature of craving and its impact on our choices and behavior.   In their PNAS study, the scientists conducted a series of experiments that asked subjects to indicate how much they’d pay for certain snack foods after they developed a craving for one of them. Significant differences in a desire for a specific food item (e.g., a Snickers or granola bar) before and after exposure to the item constituted cravings.

The results showed that people were willing to pay more for the same exact snack food item if they were recently exposed to it and asked to recall specific memories of consuming it, compared to how they felt before this exposure. The researchers also found that craving and hunger are partly distinct experiences—since the craving was there even when the subjects weren’t hungry.   “In other words, craving Snickers does not make you hungrier; it makes you desire Snickers specifically,” explains the co-lead author, who adds that there was also a spillover effect as the craving applied, to some degree, to similar food items that subjects were never exposed to (e.g., other chocolate, nut, and caramel candy bars).   Moreover, the researchers found more willingness to pay in excess for an item the subjects craved when the item was a higher-calorie, higher-fat/sugar content food, such as a chocolate bar or cheese puff, compared to healthier options (e.g., a granola bar).

Finally, the experiments revealed a connection among craving, portion, and price. That is, people were willing to pay disproportionately more for larger portion sizes of the craved items.   “It appears that craving boosts or multiplies the economic value of the craved food,” said the researchers.

So, what? When our genetics were formed there were no unhealthy options. Our ancestors needed the sugar and the fat for the very physically demanding life that they led, so the need for the sweetness of certain sugars (fructose etc.) and the energy content of fats was programmed into our reward system—giving us a neurochemical reward when we ate those foods. As we are still those creatures we still have those drives and the processed sugary, fatty stuff still makes us feel good.   In our modern society, our design specs have been turned against us.   The research also shows that increasing the price of unhealthy options won’t work. We will still seek to satisfy our genetically-driven cravings—perhaps, as some research has shown, by cutting back on healthy food to do so. As a scientist with an understanding of these things, I find that very sad.

What now? One thing we can immediately do is to lower the price and increase the availability of healthy sweet options—berries and other fruits for example—which will satisfy our craving and be good for us. Also, we can educate our children to look for the words “no added sugar” on the labels of the processed foods they buy. As adults, it would be a good idea for us to do the same.   Another obvious thing would be to make fruits and healthy snacks available at the workplace. For example, I have been in many meeting rooms and been offered cookies, but very rarely fruit.