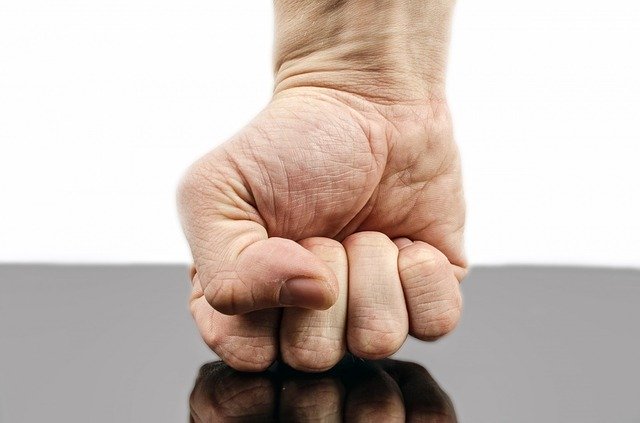 Headline seen recently: The WHO reports that domestic violence has increased by 60% in Europe since the start of COVID-19.

I have been sitting here looking at the keyboard of my computer, waiting for an idea for an article to come. So many have been promised to so many outlets. That statistic keeps whirring in my mind. How did it come to this?

What to write? There’s so much out there about the coronavirus epidemic and what we should do to remain safe—surely it’s time to write an uplifting piece about the future, when the restrictions have been lifted and people can go back to work?

Ah, but there’s the rub. Every time I begin to tap out the first paragraph of the putative article, I find my writing consumed with anger.

There are a lot of things to be angry about. That statistic for a start. Then there’s the loss of jobs, status and dignity that a lot of people are facing—some long before the virus hit. There’s the mounting inequality that automation, and the resulting devaluation of human labor, have caused.

There’s the leadership by incompetents that we find in most countries—with the notable exceptions of New Zealand, Iceland and, possibly, Australia.

There’s the destruction of the environment due to the Trump Administration—and others—in their hatred of anything that stands in the way of corporate profit.

The anger has been growing for many years—not just in me, but perhaps in the majority of people. It has its origins in a number of areas—contextual, biological, cultural, historical and even anthropological. As a scientist I look at things such as societal anger and ask a number of questions:

We all get angry at times. Some people only very rarely. Some—thankfully a minority—of us are consumed by ongoing anger, resentment, and aggression. For most of us, the anger that we feel bubbles beneath the surface, just occasionally bursting forth. Research has shown that we need those outbursts, which, for the most part are verbal in nature. As we get more afraid, as our autonomy is stripped away, as we feel more and more unsupported, the anger is liable to become more physical, more violent. Hence the WHO statistic.

Many studies have shown that anger is associated with anxiety born of uncertainty, helplessness and a loss of control. Scientifically speaking, anger is the result of multiple factors but the most obvious is to do with the stress hormone cortisol. When we get anxious the level of cortisol in our system goes up, which triggers a lot of negative effects in the body. When anxiety reaches a certain level or is there for a long time, our heart rate remains unsustainably high and this makes us more prone to heart disease. A high level of cortisol also makes us more liable to diabetes (which is increasing) and many other ailments.

Cortisol in the brain acts as a neurotransmitter that readies the whole system for flight, fight or freeze—the famous amygdala hijack that Daniel Goleman wrote about in his book “Emotional Intelligence.” We are less able to make decisions, even about our own health and wellbeing.

Anger releases the tension that anxiety builds up so that the level of cortisol goes down. At the same time, testosterone climbs--both in women and men. Cortisol provokes a desire to withdraw—especially from those close to us-- whereas the testosterone driven by anger propels us closer to that which makes us angry and drives us to take action—and therefore the possibly of violence increases.

Observe the angry demonstrators carrying guns who crowd in on legislators and governors of lockdown states in the US. Will the guns be used? Probably.

All this obviously leads to the why now question. Besides the issue of the lockdown, resentment has been building for years in the US and elsewhere at issues such as job loss, income, status and, autonomy decline and the relentless rise in inequality.

Supportive relationships make us feel safe and able to contain our anger and mitigate our anxiety. We are genetically designed to be surrounded by a nexus of relational support.

But there has been a relentless undermining of the value and importance of relationships. Because of social media, smartphone use, and other technology, relationships have become a throw-away commodity instead of something that people—especially younger people—could call on for support. This leads to anger at self. Since we are programmed to surround ourselves with supportive relationships, when we lose that support, or don’t feel that we really have it (e.g. when all our “friends” are Facebook ones), we feel that there is something really wrong with us.

We turn the anger inward. The effectiveness of our immune systems—psychic and biological—decline. We become mentally or physically ill. Suicide comes to be seen as the only way out of our self-hate.

The WHO statistic will mean that we are creating a future where anger will be more pervasive because a disrupted, anxious or abused period of childhood due to parental anger or violence will create a generation of anxious, angry and/or depressed adults. That will be the lasting legacy of COVID-19—and our present social and technological structure—unless we take action now.

Is there a way out? Is there a future which is not filled with anger and resentment? Nobody can know for sure, but there are some hopeful saplings growing in the petrified forest.

Chief among these, if we can keep it, is the growing sense of neighborhood awareness. People are getting to know their neighbors better. District community-help organizations—even apps—are sprouting up. We are relearning how to rely on those physically close to us for little and even major things. People who will notice when we’re around and worry when they haven’t seen us. There is a growing sense of relationship that people that I Zoom to all around the world are noticing in their communities.

It's also safer for children and spouses. Abuse is less prevalent when neighbors are physically and emotionally close.

To some extent this new neighborliness is based on a common fear of the virus and the fact that we’re forced to work from home. So it’s fragile and tentative.

But if it lasts, then the oxytocin transporter gene (the enabler of trust, bonding, empathy and meaningful spirituality) in all of us will work its miracle to reduce both anxiety and anger and at least mitigate the symptoms of depression—as it does in the hunter-gatherer society I lived in for a year.

The other hopeful sign is that people are no longer willing to put up with the growing inequality in our society. As many studies have shown, societies collapse when inequality reaches a certain level. In hunter-gatherer societies, where private ownership of anything is virtually unknown (except for a few bits of decoration made of feathers, predator teeth or shells) the rate of inequality was very low and the rate of social anger almost zero.

The most famous measurement of social inequality is the Gini coefficient. According to this scale, a 0 rating equals perfect equality (like that of the hunter-gatherers), and 1 is where one person or family has everything. Several very recent studies have said that 0.7 is near to societal collapse and 0.8 is the point at which the society will almost certainly collapse. We’re not far off it. Some studies have shown that the Gini coefficient measurement of the world at the present time is about 0.68 (in 1820 at the start of the industrial revolution it was 0.43). One 2018 study reported that the US was at about 0.8 (no wonder the anger level is so high). Other countries in the danger zone include Mexico, South Africa and Brazil.

If people vote against the unequalizers, or refuse to do their bidding, or even rise up against them…….

So, maybe there is hope that with the ending of COVID-19 there will be a reduction in the WHO statistic and a lessening of our anger. But for that to happen, change—fundamental change—must take place. Not just in governments and political systems, but in the way we live, and the way we relate and in what we think is important to us.

In a follow up article I will give you some strategies on how to deal with this anger - in yourself, in your clients and colleagues and even in your family.

Anyway, if you have been, thanks for reading.

There are a lot of things to be angry about. Is there a way out? Is there a future which is not filled with anger and resentment? Nobody can know for sure, but there are some hopeful saplings growing in the petrified forest.

In this follow-up to my recent article - Why are we so angry? - I look at the six stages of anger and give you strategies on how to deal with an angry client, colleague, friend or family member.