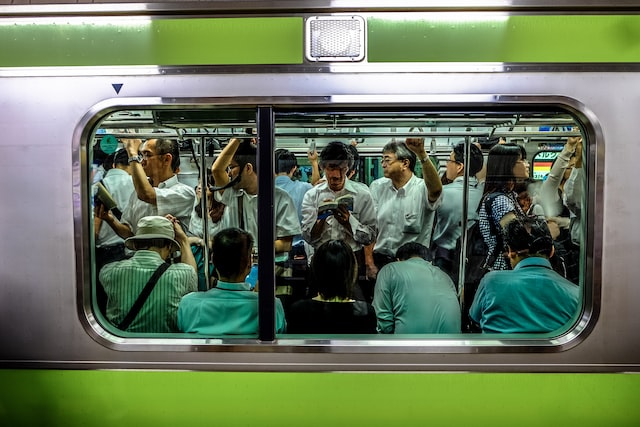 As a result, rush-hour commutes on public transit may feel significantly longer than other rides that objectively take the same amount of time.

The research adds to evidence that social context and subjective feelings distort our sense of the passage of time, and may have practical implications for people’s willingness to use public transit, particularly after the pandemic.

What the researchers say: “It’s a new way of thinking about social crowding, showing that it changes how we perceive time,” said the lead author. “Crowding creates stressful feelings, and that makes a trip feel longer.” The study was published in the journal Virtual Reality.

Prior research has identified subjective emotions, heart rate and a situation’s complexity, including the number of items requiring attention, among factors that can influence one’s experience of time. Experiments typically have been conducted in lab settings using simple tasks and stimuli, such as shapes or images on a computer screen, for short durations.

In a novel application of VR, the team tested time perception in an immersive environment that was far more realistic, but that allowed crowding to be systematically controlled. More than 40 study participants took five simulated subway trips with a randomly assigned duration of 60, 70 or 80 seconds, each with varying crowding levels.

After donning heart-rate monitors and VR goggles to “board” the New York City subway scene participants heard an announcement to “stand clear of the closing doors, please,” followed by the ding-dong of a bell as doors closed and the sound of a subway accelerating. The trip ended with the train stopping and another bell sound.

Each crowding level added one person per square meter, resulting in crowds ranging from 35 to 175 passengers. Study participants could look around the train car at animated avatars of seated and standing passengers who changed positions, looked at phones or read books and magazines.

After each trip, study participants answered questions about how pleasant or unpleasant the experience was on a scale from 1 to 7 and were asked to do their best to accurately estimate how long the trip took.

The result: Crowded trips on average felt like they took about 10% longer than the least crowded rides. The distortion of time related to the degree of pleasure or displeasure experienced, with unpleasant trips feeling 20% longer than pleasant ones, which the authors attributed to the activation of emotional defense systems when people feel their personal space is violated.

“This study highlights how our everyday experience of people, and our subjective emotions about them, dramatically warps our sense of time,” the researchers said. “Time is more than what the clock says, it is how we feel or value it as a resource.”

Based on U.S. transit commutes averaging just over 60 minutes per day, the results imply that a year of crowded commuting would add more than 24 hours, or three full workdays, of “felt” time to reach destinations.

Crowding’s influence on perceived travel time likely will only grow stronger after coronavirus-related warnings to avoid crowds, according to the research. That could contribute to more people choosing alternatives to public transit, potentially increasing commuting’s carbon footprint.

In addition to their basic science finding about the nature of time perception, the scholars said their research could help transportation engineers improve ridership models – the focus of a related research paper – and vehicle designs. Mitigating the unpleasant experience of crowding, they said, would make trips feel shorter.

So, what? That the subjective experience time is relative to context and past experience was something that I pointed out in a paper many eons ago. It is natural that crowding should be a powerful driver of temporal perception since we are not designed to be among large numbers of people.

Our design specs work best when we are in a small group—a community of 150 individuals or less (the average hunter-gatherer band), work groups of between 3 and 7 (high performing teams are this size) or even being with a group of friends.

Many studies have shown that when the numbers increase we become more stressed—as any organism will if its design specs are exceeded. That increase in stress robs us of pleasure, makes us feel more agitated and takes away our sense of defensible space.

Our design specs work best when we are in a small group—a community of 150 individuals or less, work groups of between 3 and 7, or even being with a group of friends.

A series of experiments found the younger white British male was 29% more likely than the 50-year-old black British female to be offered a job interview.

Why silly distractions at work can actually be good for you

Can a YouTube video really help when it comes to dealing with annoying emails or dreaded tasks?