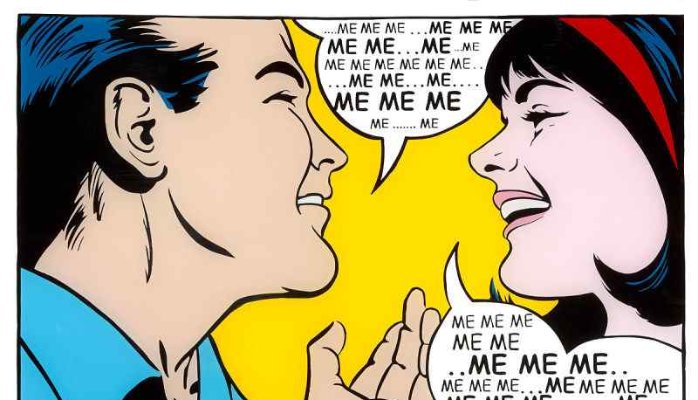 I met with a potential coaching client the other day. He was a member of the C-suite of a large listed company. He couldn’t stop talking about himself. Everything in his life revolved around him and he seemed incapable of seeing anything from anyone else’s perspective. He is by no means unusual. The conversation with this man kept swirling around my head as I read this very interesting study.

What the researchers say: We all know someone who seems to really enjoy talking about him—or herself. Yet while the chorus of “I, I, I” and “me, me, me” might convince us we are conversing with a classic narcissist, the researchers suggest we shouldn’t be so quick to judge.   They found in an earlier study that frequent use of first-person singular pronouns – I me and my – is not, in fact, necessarily an indicator of narcissism.   Instead, this so-called “I-talk” may signal that someone is prone to emotional distress, according to a new, follow-up study in the Journal of Personality and Social Psychology.

Previous studies have suggested that I-talk, though not an indicator of narcissism, may be a marker for depression. While the new study confirms that link, the researchers found an even greater connection between high levels of I-talk and a link to negative emotionality in general.   Negative emotionality refers to a tendency to easily become upset or emotionally distressed, whether that means experiencing depression, anxiety, worry, tension, anger or other negative emotions.

The researchers found that when people talk a lot about themselves, it could point to depression, but it could just as easily indicate that they are prone to anxiety or any number of other negative emotions. Therefore, I-talk shouldn’t be considered a marker for depression alone.   “The question of whether I-talk reflects depression more specifically, or negative affect more broadly, was a really important question because if you’re thinking of using I-talk as a screening tool, you want to know if it screens specifically for a risk for depression or if it screens more broadly for a tendency to experience negative affect, which is a broader risk factor for a suite of mental health concerns,” the lead author said.

The researchers’ findings are based on a large dataset of more than 4,700 individuals from six labs in two countries – the U.S. and Germany. The data included measures of individuals’ use of I-talk – either in written or spoken tasks – as well as measures of depression and negative emotionality.   “Previous research had found the one link – between I-talk and depression – but it hadn’t examined moderators in great detail in a large sample. That was the next step,” he said. “Our results suggest that I-talk may not be very good at assessing depression in particular. It may be better at assessing a proneness not just to depression but to negative emotionality more broadly.”

So how much I-talk is considered a lot? The average person speaks about 16,000 words a day, about 1,400 of which are, on average, first-person singular pronouns, the researchers noted. Those prone to distress may say “I, me and my” up to 2,000 times a day.   Researchers also looked at whether gender and communication context affected the relationship between I-talk and negative emotionality. They found that gender does not play an important role but communication context does.   “If you are speaking in a personal context – so you’re speaking about something that’s of relevance to you, like a recent breakup – then we see the relationship between I-talk and negative emotionality emerge,” they said. “But if you’re communicating in a context that’s more impersonal, such as describing a picture, we did not see the relationship emerge.”

In addition, the researchers found that the specific type of first-person singular pronoun made a difference. Frequent use of the subjective first-person pronoun “I” and the objective first-person pronoun “me” was linked to negative emotionality, but frequent use of the first-person possessive pronoun “my” was not. That may be because “my” connects a person to another individual or object on the “outside,” effectively taking the “psychological spotlight” off the self they said.   To better understand why I-talk may indicate distress, researchers suggest thinking back to your last “woe-as-me” moment.   “We’ve all gone through negative life events when we’re feeling down or we’re feeling anxious, and when you think back to being in those places, when you’re just so focused on yourself, you may say things like ‘Why can’t I get better?’” the lead author said. “You’re so focused on yourself that not only in your head are you using these first-person singular pronouns but when you’re talking to other people or writing, it spills into your language – the self-focus that negative affectivity brings about.”   As the lead researcher says, regarding the research: “Stress can make you be caught in the metaphorical ‘I’ of the storm.”

So, what? We’re often too quick to make judgements about people and to label them as being this or that. People who seem fixated on themselves we often tend to class as narcissists whereas they may just be overstressed or depressed or anxious. Often this misdiagnosis can lead to someone not being offered a job, or not hired in the first place.   This study is a good corrective and should be remembered before we rush to judgement.

Smartphones are an integral part of most people's lives, allowing us to stay connected and in-the-know at all times. The downside of that convenience is that many of us are also addicted to the constant pings, chimes, vibrations and other alerts from our devices, unable to ignore new emails, texts and images.

Successful individuals who suffer from what is known as impostor syndrome believe that their success is undeserved and that others overestimate their competence. The term “impostor syndrome” was coined in the late 1970s and originally applied to some highly successful businesswomen.