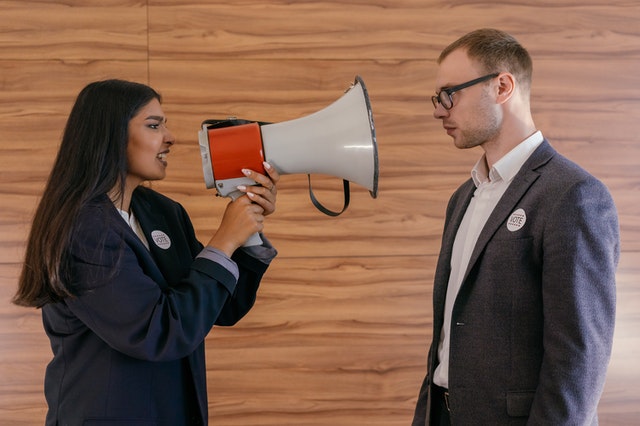 Alicia and I have found that business leaders often encourage people to speak up in the workplace. Whole programs are devoted to creating a “speak up” culture. Suggesting a creative idea or a more efficient way to work can help companies overcome challenges and meet goals. All very good except that few of these interventions (except ours, of course) actually change anything in the long term.

However, new research shows another, more subtle and often overlooked form of speaking up has a big effect on the way work gets done and how teams come together.

What the researchers say: “What we say within a group, the ideas we suggest and the way we support others, signals something about who we are to our coworkers. It can attract people to us or repel them,” said the co-author of the paper published in the Journal of Management.

The research team demonstrated how two different ways of communicating work-related issues shape reputations and affect the formation of teams to complete short-term projects. They found people who use “supportive voice,” which fuels trust and cooperation, have a higher chance of being recruited to a team compared to those who use a more task-oriented “challenging voice.”

Challenging voice pushes back against the status quo and offers ideas for improvement. While it has some downsides, such as perceived criticism or conflict, challenge voice tends to signal an employee’s competence or expertise. The researchers said managers, especially in dynamic and fast-paced industries, often value this communication behavior as something that can help teams complete tasks efficiently and effectively.

“Supportive voice is still about speaking up in the workplace, but it's looking at what’s going well in the group or team. It might defend the status quo by saying there's value in what the team is already doing,” they added.

To understand the effects of the two communication behaviors on team formation, the researchers collected data from a cohort of full-time, first-year Master of Business Administration students over a four-month period. The students were periodically assigned to different teams to complete projects and then asked to rate fellow team members’ use of challenging and supportive voice, quality of work, reputation, and trust. Near the end of the study, students were allowed to assemble into teams without any direction from the MBA office.

The study results revealed students who ranked high on challenging voice built a reputation for conducting high-quality work, but students preferred to work in teams with those who frequently used supportive voice. The researchers found the results surprising (though any diligent TR reader wouldn’t).

“Because challenging voice is the predominant form of speaking up we encourage in classrooms and as managers, we thought it was going to be strong driver of people selecting team members later. But as it turns out, it’s this more supportive voice that helps establish relationships and a sense of trust amongst individuals in the group was more important,” the lead author said.

The researchers pointed out that having both types of voice would be ideal, but between the two, supportive voice was a stronger driver of team formation.

So, what? The paper’s findings could help employees realize the way they speak up can have a strong effect on informal teaming up at a later point and help them move into leadership roles. As for managers, the results could encourage them to foster and provide space for more supportive voice by coaching this type of behavior and rewarding employees who speak up supportively.

Humans are not persuaded by facts or reasoning—as research over the past few years has conclusively shown—and the need for relationship support is one of our prime drivers. This research provides more evidence confirming this basic point.

The more employees engage with health and wellbeing programs, the better the quality of co-worker relationships, the less they experience bullying over time, and the better their longer-term wellbeing and job satisfaction.

Different ways of communicating work-related issues can shape reputations and affect team formation. Using a “supportive voice” can fuel trust and cooperation and lead to a higher chance of being recruited to a team, compared to those who use a more task-oriented “challenging voice.”