Were the Neanderthals smarter than we are? 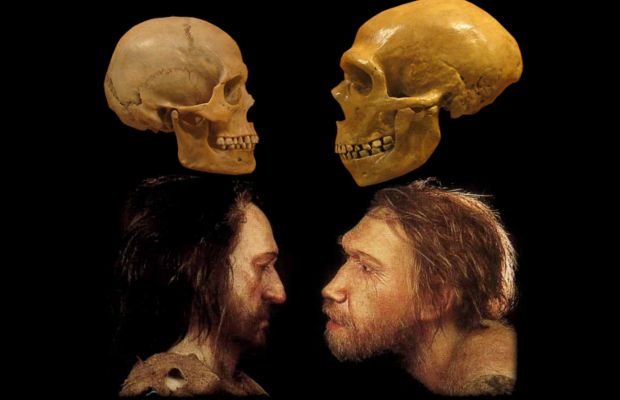 Neanderthals had larger brains than modern humans do, and a new study of a Neanderthal child's skeleton now suggests this is because their brains spent more time growing.

Modern humans are known for having unusually large brains for their size. It takes a lot of energy to develop such large brains, and previous research suggested that the high cost of modern-human brain development was a key reason why human growth, in general, is slow compared with that of other primates.

What the researchers say: “If you look at earlier primates, they have much quicker development,” said the study co-lead author. The research appears in the journal Science.

To learn more about Neanderthal development, scientists investigated an exceptionally well-preserved, nearly complete skeleton of a young male Neanderthal unearthed at the 49,000-year-old site of El Sidrón in Spain. A study in March found that Neanderthals at El Sidrón once dined on woolly rhinoceroses and wild sheep, and even self-medicated with painkillers and antibiotics.

To find out how old the Neanderthal was when he died, the scientists cut into the skeleton's teeth and counted the number of growth layers, much as one can estimate a tree's age by counting the number of rings in its trunk. They estimated the boy was about 7.7 years old when he died. The cause of his death was unclear, but it did not appear to be disease or trauma.

The skull of the Neanderthal was still maturing at the time of death, and his brain was only 87.5 percent the size of the average adult Neanderthal brain. “We think this Neanderthal boy's brain was still growing in volume,” the lead researcher said. “At about the same age, the modern human brain would have reached nearly 95 percent of its volume,” he added.

These findings suggest “it took a little bit longer for the brain to grow in Neanderthals than in modern humans,” he said. Similarly, a number of the Neanderthal's vertebrae had not yet fused, although those same vertebrae tend to fuse in modern humans by about the ages of 4 to 6.

“We thought our slow way of growing was very specific, very particular, very unique to our species,” they said. “What we realize now is that this pattern of slow growth that allows us to have this big brain and mature slowly, with all the advantages involved with that, was also shared by different human species.”

It remains uncertain what consequences if any, this different rate of brain development might have had for how Neanderthals thought or behaved, the researchers added.

So what? Interestingly this study of a long-almost-lost species (Europeans and all other non-Africans carry about 5% of Neanderthal DNA in their genome), has a lot to say about modern learning. The question as to which species were smarter will now become a much hotter topic. This is because the longer brains take to physically mature the longer the peak learning period that they have. Humans and one supposes Neanderthals, learn very fast in the early stages as the brain grows to its final size. The capacity to learn slows down the larger the brain gets (we learn more in the first year of life, when the brain is growing fastest, than at any other time).

Presumably, the Neanderthal child had the capacity to learn more because he had longer to do so. As an adult, he would’ve then, possibly, been smarter than modern human adults. But why should the younger maturing brain learn so much more easily? I believe one of the reasons is that we had fewer cognitive and emotional blocks to learning. The assumptions that we build up about ourselves and our capacity to learn and to understand develop as we grow. They are based on our experience, what our parents and teachers tell us about ourselves, the influence of our relationships with our childhood friends and enemies. In the end, we become specialized in what we think we’re good at. We tend to tell ourselves “I’m good at sports,” or “I’m not good at math” for example or “I don’t understand science.” Once that happens we cease to learn and for the rest of our lives we hold fast to that view of ourselves—it becomes part of who we are.

Can we re-start rapid learning? Well probably yes, and that is something that Alicia and I are working on. We are using as a base the work that has been done using the concept of “learning mindset” or “growth mindset.” The essence of this is that you can rid yourself of the shackles of negative assumptions if you are guided to experiment in new areas.

The new that we are applying is the idea of the primacy of the human drive to acquire and deepen supportive relationships (not a new concept to TR readers). We are able to change our assumptions and our beliefs if we are committed to the relationship with someone—or a group of people—who believe something different. We change our beliefs to deepen the relationship and make ourselves more attractive to that person or group. In that way, we seek to gain their support.

This is learning and it can be quite rapid. Thus if we want the support of our science teacher we will adopt the assumption “Maybe I can try to do well at science” and begin experimenting.  Assuming that the teacher responds to this behavioral change and encourages it through praise and recognition (thereby activating the dopamine and oxytocin reward systems which many studies have shown are crucial for learning) the new assumption will become solid.

The brain in this way “learns to learn” and we can adopt other experimental behaviors. This is, I believe the basis of all adult learning and change.

Maybe we can become as smart as the Neanderthals after all.