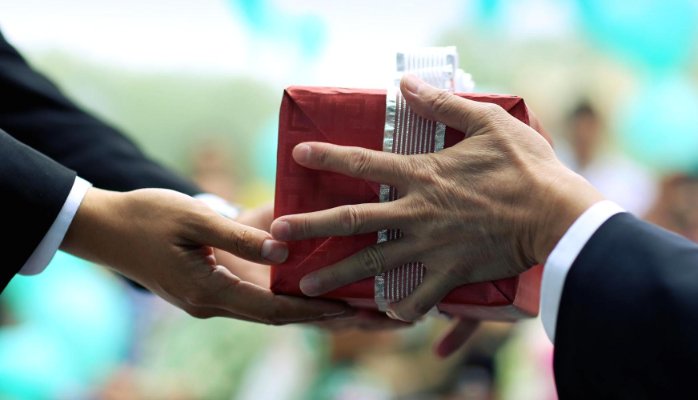 If a sales agent brings their customer a small gift, the customer is much more likely to make a purchase, a new study has shown. This works particularly well when the person receiving the gift is the boss. The fact that even small gifts can result in conflicts of interest has implications for the debate about where the line should be drawn between tokens of appreciation and attempted bribery.

Is the offering of a gift a sign of gratitude for a good business relationship, or a bribe? It’s a fine line that is often hard to judge. In many industries and companies there are guidelines on the size and value of presents that employees can accept. Such limits are based on the assumption that small gifts are unproblematic but more valuable gifts lead to conflicts of interest for the recipients and influence their decisions. A box of chocolates? No problem. A seat in a box at a Formula 1 race? Perhaps not.

What the researchers say: In a controlled field experiment carried out in pharmacies and drugstores, Swiss researchers investigated whether small presents in business relationships really had no influence on the behavior of the recipient. In the experiment, sales representatives gave some of their customers six tubes of toothpaste worth a total of around 10 francs. This seemingly insignificant token led to orders that were on average almost twice as high as otherwise would have been.

This effect only occurred, however, if there was an existing business relationship, meaning the giver and recipient already knew each other. If a gift was given at the first encounter, it was more likely to have the opposite effect: The amount ordered in this case tended to be lower than when no gift was given. “Turning up with a gift right at the beginning of a business relationship may seem calculating and is therefore counter-productive,” remarks the lead author. “But if there is already a relationship, the customer perceives the gift as a token of thanks and an indication that the relationship is appreciated.”

Distributing small presents may therefore be a profitable strategy for sales reps. This is especially true if they are handed over personally to the boss. In the experiment, if the gift was given directly to a shop manager, the value of the order increased more than four times. With ordinary employees, however, no effect was seen. This can be explained by the fact that the managers generally have greater decision-making powers and can make larger orders without having to ask someone else. “They also bear the most risk, however, which makes it surprising that they were willing to order so many products,” said the co-author of the study. The researchers believe that the effect would be magnified if employees have decision-making power but at the same time bear little risk.

Their findings offer new insights in the debate about the extent and purpose of limits on gift-giving in business relationships. “Our study shows that the type of relationship between the business partners plays an important role and that even small gestures can be interpreted as personal favors which one repays with a return favor,” they conclude. “The debate about regulations and industry guidelines to tackle corruption has so far not sufficiently taken into account the effects of such small gifts.”

So, what? I’m perplexed that this should come as a surprise. In behavioral neurogenetic terms we are hardwired to look for signs of support in every real or potential relationship. The more support we perceive the more we value the relationship. The small gift is a way of saying “I am ready to offer you support.” The recipient looks not at the size of the gift but at the relational support that it’s a token of.

To be really effective in terms of our design specs the first “gift” should be praise and respectful curiosity about the other person. This is far more powerful than any material offering. The later material gift is a way of solidifying the mutual support tendered by the earlier concern and recognition

Eliciting an emotion before beginning a creative project offers product developers an inexpensive and simple way to boost their generation of ideas.