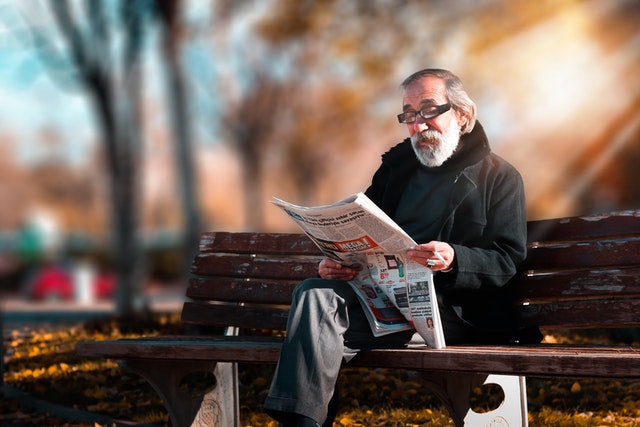 Not being able to distinguish fake news from real news can have serious consequences for a person’s physical, emotional and financial well-being — especially for older adults, who in general have more financial assets and must make more high-stakes health decisions.

So how good are older adults at detecting fake news?

A new study has found that older adults are no more likely to fall for fake news than younger adults, with age-related susceptibility to deceptive news evident only among those categorized as the “oldest old.” (Read an interesting discussion of what is “oldest old”.)

The study was published in the Journal of Experimental Psychology: Applied.

The research is the first to delineate the role of analytical reasoning, affect and news consumption frequency on the detection of fake news in older people as well as in direct comparison to young adults.

What the researchers say: “We wanted to see if there was an age difference in determining whether news is true versus false,” said the lead author. “We specifically wanted to look at this because we know that with aging most people show some decline in their cognitive abilities. But we also know some information processing abilities are preserved or even improved.”

The research is scant regarding older adults’ susceptibility to fake news and what factors might aid or impair a person’s ability to judge the veracity of information.

Previous work suggested that older adults shared false information over social media more often than did young adults during the 2016 presidential election. And the dramatic increase in misinformation during the COVID-19 pandemic has heightened concern, since the virus is particularly deadly for people over 60.

But is that concern warranted? “People have this perception that older adults cognitively perform worse than young adults across the board. But that’s not the case,” said the study’s co-author.

While many people show cognitive decline as they age, it is also true that with age comes a broader knowledge base, more life experience and, often, a more positive outlook. As a group, older adults also tend to consume more news than younger adults. These factors may filter and contextualize information processing in older adults. They get wisdom.

The researchers set out to explore age differences in the ability to identify fake news and how analytical reasoning, affect (mood/emotion) and news consumption frequency affected that ability. The study was conducted between May and October of 2020; the older adults ranged in age from 61 to 87 years and the younger adults were college students.

In the study, participants read and evaluated 12 full-length news articles about COVID and non-COVID topics, with six real and six fake stories in each category. After reading an article, participants were asked such questions as whether the article was real or fake and how confident they were in their decision.

They found that the ability to detect fake news was comparable between young and older adults. Determining an article was fake was related to individual differences in analytical reasoning skills for both age groups.

It may only be in very late old age, at a time in life when declines in cognitive abilities cannot be compensated for anymore by gains in life experience and world knowledge that individuals become particularly vulnerable to deception via misinformation and fake news, the researchers said in the study.

“It is a particularly high-risk population with high stakes for wrong decision making, not just for themselves but also for society at large,” the researchers said.

The findings have the potential to influence design of decision-supportive interventions to enhance news communication and reduce misinformation across the lifespan and in aging, the team said.

So, what? I have deep problems with this study. For a start the authors seem fixated with chronological age. So much recent research has shown that judging “age,” particularly cognitive age, by the number of years lived is pretty meaningless.

For example, studies over the last month have shown that the causes of dementia can begin in the womb, that exercise levels and BMI have a direct bearing on Alzheimer’s risk and that hunter-gatherers, of whatever age, don’t get dementia. Not only that, Japanese live many years longer without cognitive decline than do people in Europe and the US and those living with more greenery around them are more likely to avoid Alzheimer’s.

Outside of showing that 25-year-olds and 80-year-olds are pretty much the same in terms of cognitive ability (which may come as news to some) the study, though interesting, does not prove much.